Starting on Monday, members of the BRIF, Spain’s forest fire fighting reinforcement service, began an indefinite strike against their working conditions and low salaries, as they are on average paid €16,000 a year.

The organisation is also seeking official recognition as firefighters, as the workers are currently deemed reinforcements.

The fire brigades on strike consist of 570 workers across ten different bases.

This strike marks the first time any fire prevention or containment service have demonstrated during active fires. 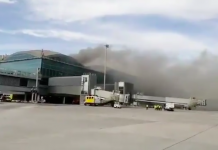 Charlie Smith - 31 May, 2020 @ 16:54
THE family of a British Magaluf club rep, who killed herself, have revealed their anguish over the repatriation of her body.