With no shortage of amusing anecdotes, Paul tracks his time on the Costa and maps out how he came to create the Roman Oasis, one of the most unique restaurants in Andalucia, found in Manilva.

Jotting down the trials and tribulations of being a restaurateur for the past 14 years, father-of-three Paul has finally revealed all in his book, My Roman Oasis.

Here are three extracts which capture the comical tone throughout Paul’s page-turner.

Dusk was falling as we settled him in for his first night alone, and by way of a joke, I said, ‘I don’t know why you’re worried about a silly mat when there are much more important things to worry about living out in the country, like the wolves for example.’

He looked really worried, and said, ‘You mean there are wolves here?’ All the others who had been to Spain before knew there were no wolves in that part of Spain and began joining in the joke.

Alan said, ‘Yes, there are packs of them up in the hills but you should be all right as they only come down at night. Keep your door locked and you won’t have any trouble.’

Jeff looked pensively at the window, before adding, ‘Maybe we should put some bars on the window, what do you think, Paul?’

As we left we heard the sound of a key being turned firmly in the lock and a bolt being rapidly shot into place. ‘You are a rotten bastard, Paul. It’s my uncle after all,’ said Jeff, laughing as we sat having a jar or two in a bar down the road.

It was now Alan, of course, who suggested that we went back later to the restaurant to impersonate a wolf pack. Closing the car doors as quietly as we could, we walked stealthily to the restaurant which was in darkness except for a strip of light coming from Harry’s room.

Creeping past the window, we then went around the back to the car park onto which Harry’s door faced. My wolf impression is pretty realistic and once on a trip to London Zoo I even gained the attention of the normally dormant wolf pack there. And so, in the utter silence and the still of the night, I began to howl.

Without wishing to appear conceited, I would like to think that if you were listening to my rendition you would see in your mind’s eye a large grey wolf standing on a high rock, silhouetted by the moonlight and the leader of a large pack gathered below, howling eerily in a prelude to the hunt.

After this we scurried and scuffed around the gravel car park with our feet and then, as one of us scratched at the door, the other knelt down and put his mouth to the crack under the door and huffed and puffed, as it were. Yells of terror and what sounded like some kitchen implement being banged against the wall in the hope of frightening a wolf pack followed us back to the car where we rolled around nearly wetting ourselves with laughter.

Who would have Christmas day on the 30th of September? Well, I would, of course. It was one of our

last nights. I decided we needed to do a traditional dinner with turkey and all the trimmings, followed by Christmas pudding. The logistics of doing this in Spain in September was daunting especially with our cooking facilities which were barbecue-orientated.

Thankfully, I had a professional hand in the guise of my friend Keith Floyd who was staying with me at the time. We had a huge Christmas tree, the restaurant was bedecked with icicles off the internet, presents for everybody on the tables along with hats and crackers. An enormous amount of planning and money went into making the night special.

As the customers arrived at the gate they were met by ‘Summer’, aka my son Jason dressed in beach clothes sitting in a deck chair with a parasol on a pile of sand. As they walked up the long path they went through ‘Autumn’ because they had to shuffle through piles of brown leaves and onto the ‘Rainy Season’, where we had garden sprinklers showering them, the staff leading them through with umbrellas.

They arrived at ‘Winter’ with ski stuff littering the path to a curtain and, when they passed through the curtain, it was indeed Christmas. There was a snow machine, creating cascading flurries of snow and there were Christmas carols playing.

I greeted them in a Father Christmas outfit. They were given a glass of hot gluhwein (by one of the staff dressed as a reindeer harnessed to a Russian sleigh).

Unfortunately we couldn’t find a Jesus in any department store as they had all been nicked.

The first Christmas I tried to buy a nativity scene for the children all the baby Jesuses were missing; believed stolen.

The evening was an enormous success but we did have a problem with the Christmas puddings. I managed to get them flown in. They were pre-cooked and vacuum packed but the problem was how to heat 140 puddings.

As we had no way to do this I turned to Keith Floyd for expert advice. We sat down, and Keith had a couple of Johnny Walker Black Labels to help the thought process. Eventually, he had a solution and asked, ‘Have you got a commercial dishwasher?’

Of course we did. And we had named it Peppa as like many appliances in the restaurant it had a nickname. ‘We’ll put them in Peppa then and run them through her a couple of times and that should do it.’

The other story concerns a feral cat from Manilva, a black and white cat that used to come into the restaurant unless of course Laurence, our St. Bernard dog, was about. Laurence loved cats until some years ago he approached a little wild kitten that proceeded to leap on his head, scratching wildly and deeply wounded both his head and his ego. After then it was WAR! He chased them, treed them, had them on top of barbed wire fences, but never actually managed to get hold of one and thus take his revenge for the indignity that he suffered at their claws.

That is, until he was having a casual wander around his domain and spotted the cat down in the play area being petted by a host of admiring children, which just added insult to injury as being petted by children was his main job and perk.

Eighty kilos of enraged dog defied the laws of acceleration and in a blur he was upon the cat and in another triumphant second, had it in his jaws. Only my shouts of ‘Drop!’ and the shrieks of horrified children outdid the cacophony of growling, hissing and spitting that was heard. Despite my orders, in this moment of victory against the foe, even the impeccably-trained Laurence refused to release the cat. Eventually, he released it but before it could be examined it ran off rapidly on its three legs that were working. Laurence was oblivious to the castigating I gave him for this act of violence. However, his body language spoke of his finest hour and the look upon his face was of sheer doggy satisfaction.

The following evening a family, who had been customers for years, arrived at the restaurant and noticed the cat which was down by the river. Maria and Dieter are German and have a holiday home here, but live in Munich and I must say a nicer family it would be difficult to meet.

The children fell in love with the cat and so after pressure and some pleading it was put in their car and taken home to Sotogrande. The next day it was found to have a broken leg, was operated on and at the end of the week flew to Germany with them to begin its new life as the family pet.

A true life rags-to-riches story brought to you courtesy of dear old Laurence, ‘WILD KITTEN FROM MANILVA, DESTINED TO STARVE, ENDS UP AS FAT CAT IN MUNICH.’ 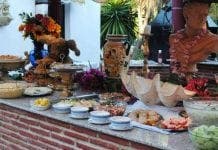 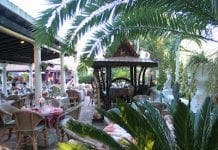 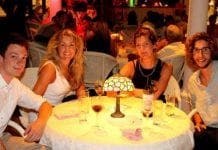