OK so there we were working hard one Saturday evening at The Pink Geranium near Cambridge in the UK and at 8pm Rod Stewart and Rachel Hunter (the model) walk in.

We have booked a table in the name of Hunter he said.

My then wife (I’ve not had as many as Rod!) said OMG of course come and sit in the lounge.

The lounge was full of people waiting to order, but you could hear a pin drop.

It was dead silent, in total shock when Rod walked in with his long tartan coat and tartan scarf hanging around his neck to the floor. It was like time stood still.  We are sailing he said and then he laughed out loud!

I popped out of the kitchen and introduced myself.  Steve, he said, I love mussels and scallops and I love Lamb, I don’t mind how you cook it.  Leave it with me I said and I went to create something for him.

At the end of the meal he started talking football and the England-Germany World Cup game of 1966.

I am more into football than my music he said and he cleared the table and with a marker pen he marked out the whole team of 1966 but not just the England team the German team too and he even included the reserves!

He headed it up Class of 66. Impressed with his artwork I asked him to sign it. I planned to frame it so I hid the tablecloth under the reception desk and then we drove Rod home after he had a few brandy´s!

The next morning Yvonne my cleaner came up to me and said ¨Mr Saunders, some people are just filthy, it has taken me all morning to get the marker pen out of this¨ she said holding up a pretty clean table cloth, clearly the one that Rod had signed.

As you can imagine I was not too impressed and Yvonne didn’t stay with us long after that!

This very simple recipe is currently on the menu at The Little Geranium restaurant in La Cala de Mijas.  It’s a real show stopper!

250g of squid ink spaghetti (or any type of spaghetti) cooked al dente in boiling water with a little olive oil and salt and then refreshed in cold water.

Bunch of fresh tarragon (leaves picked from the stalk)

Juice of 1 lemon or lime

125g of butter chilled and cut into chunks

Firstly heat a large pan on the stove until very hot and drop in the mussels. Now add the onion and garlic and stir in well. Now add the wine and put a lid on the sauce pan and shake the pan well leaving it on the heat.

After only a few minutes check the pan and stir well with a wooden spoon. Now add the double cream and the butter and stir in well and remove from the heat once you can see the mussels have opened.

Allow them to cool by tipping them out onto a flat tray or dish but ensure that you reserve all the creamy liquor.

Discard any mussels that haven’t opened.  Remove the mussel meat from the shells and discard the shells.

Now pass the creamy liquor through a fine sieve to catch all the bits of shell and grit etc. Pour this sauce into a clean frying pan and reduce a little, taste and season if necessary.

Add the mussels and stir well and finally add the cooked and refreshed pasta.

Finally add the tarragon leaves and stir in and then portion it out into 4 small bowls using tongs to ensure that you are serving the same amounts to each bowl. You should be serving at least 12 mussels per person and about 1 heaped tablespoon of spaghetti per portion and plenty of the lovely sauce.

Squeeze a little fresh lemon juice over each portion and finally drizzle a little truffle oil over each and serve whilst steaming hot. 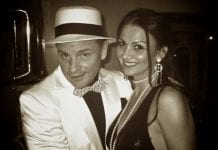 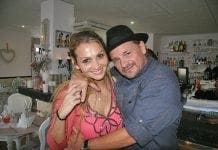