RICKY Gervais may be known for his humour, but the animal rights activist finds bullfighting no laughing matter.

The actor has condemned the activity, tweeting ‘f**k anyone who tortures an animal for fun’.

The funnyman’s serious words came in response to the news that bulls have killed seven people this summer, and four since the weekend, all in Spanish bull-runs.

And Gervais is not the only one, as a Spanish activist jumped into the Malaga bullring to comfort a dying bull last week.

Virginia Ruiz is expected to be fined up to €6,000 for her act of defiance labelled ‘trespassing’.

It comes as the ‘David Beckham of bullfighting’, Fran Rivera Ordonez, will never fight again after surviving a gruesome goring in an Aragon fight.

The pinup boy of the sport was more fortunate than his father who died in the ring almost 30 years ago. 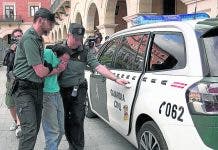