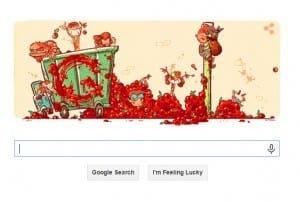 The event, considered the world’s biggest food fight happens for an hour on the last Wednesday of August.

The doodle on the Google homepage depicts locals throwing tomatoes in an event which takes place today in the town of Bunol in Valencia.

The festival’s roots come from a man being pushed off a float in a 1945 parade and resorting to tomato-slinging to vent his rage.

The event was repeated and became an official festival in 1957, today welcoming some 50,000 participants.