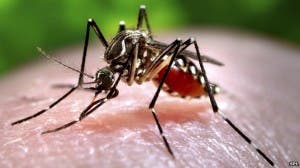 THIS autumn will be ‘the worst on record’ for Spain’s mosquito numbers.

Forecasters are predicting record numbers of the flying insects to land on Spain’s shores as the weather cools off and the prospect of showers loom.

It is estimated that the number of mozzies could double during September.

And to make matters worse, health officials are warning against a mosquito-borne virus which has been detected for the first time in Spain.

It comes after a 60-year-old Valencia man was struck down with the Chikungunya virus, leading health officials to issue an official warning about the disease.

“This is the first Chikungunya case reported from Spain without travel history to endemic areas,” a government spokesman said.

“It is important not to worry but to be aware that this new virus could be a problem.”

Chikungunya, more commonly found in Africa and Asia, is spread by two mosquito species, and is typically not fatal.

It can however cause debilitating symptoms including fever, headache and severe joint pain lasting months.