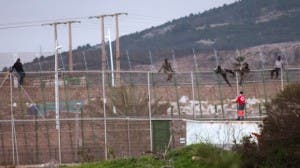 UP to fifty refugees trying to escape from a Valencia detention centre were met with riot police firing rubber bullets today.

A group of migrants reportedly climbed on the roof of the centre, threw stones and branches at guards and some even set fire to mattresses outside.

Authorities resorted to firing rubber bullets and brought the situation under control within two hours.

Local media is claiming most migrants being held at the detention centre are from sub-Saharan Africa.