DEFIANT calls for British Navy ships to be stationed in Gibraltar have been made during a raucous National Day rally. 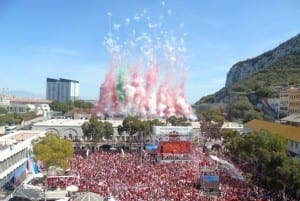 A group of 11 British politicians delivered rip-roaring speeches focussing on recent tensions with Spain and backing Gibraltar’s right to self-determination.

The Casemates crowd – a sea of red and white – echoed the patriotic sentiments as Chief Minister Fabian Picardo delivered the final address, centering around a salute to the ‘evacuation generation’ of 75 years ago.

Linking it to the current refugee crisis engulfing Europe, he vowed to help as much as possible under the plea that ‘sharing is caring’.

But it was Conservative MP for Romford, Andrew Rosindell, who got the biggest cheer, when he insisted the Royal Navy should – once again – have battleships permanently stationed in Gibraltar.

“The people of Gibraltar are a part of the Great British family and I would like to see a battleship here to apprehend any Spanish ship to illegally enter British waters,” he said.

Democratic Unionist MP Ian Paisley also insisted it was time that a ‘senior’ member of the Royal family visited the Rock.

“These are our international waters, this is our country, these are our people and we must support them,” he roared in a rousing address.

“We will never surrender this rock!”

After waving a letter of ‘best wishes’ from the Queen, the Chief Minister finally vowed to increase National Day celebrations in years to come.

“National Day will never ever be diminished. In fact, it will only get bigger. We stand together, red white and free!” he bellowed.

Following the speeches, the traditional releasing of the balloons – which has caused controversy in recent years due to its environmental impact – took place.

Then, as the crowds gazed up at the red and white speckled sky, Tina Turner’s Simply the Best blasted through the sound system, signalling the start of an almighty party.