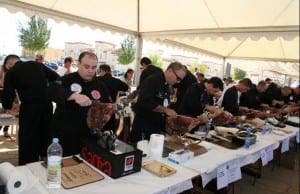 A MALAGA town has carved up the world record for most people slicing jamon at once.

Spanish carving champion José Manuel Hidalgo and world-record holder Noe Bonillo were among those demonstrating how not to make a pig’s ear of the technique.

But the nifty knifers weren’t just hamming it up. Their efforts helped raise money for Manuel Correro, a local man suffering from the genetic disorder Marfan syndrome and in need of an operation in Germany.

Event organiser and professional ham cutter Manuel Novoa has now thrown down the gauntlet  for other cortadores to try and beat them.

“I am overjoyed that we beat the record,” he said. “I challenge any group to try and beat it and then we will beat it again.

“It is competitive but it is in the name of a good cause.”