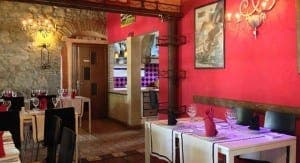 AN Andalucian train station has been named among Europe’s best… not for its transport links but for its restaurant.

With a ‘reputation for original food at reasonable prices’ the eatery is particularly well known for its mushroom dishes, croquettes and tapas with a twist.

Run by Spaniard Nieves Dominguez and her son Samuel, the duo are self-taught culinary experts.

“When I started I invited all my friends round to try the different dishes and asked them to rate each meal on a scorecard, and that is how I decided on my first menu,” she explained.

“It is important to me that my customers are happy and there is a nice atmosphere.”

Topping the list was 1e Klas, in Amsterdam’s Central station, while Le Train Bleu in Paris and Crystal, in Jungfraujoch, Switzerland made up the top three.