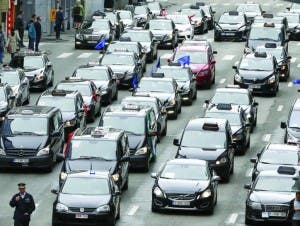 WHILE black cabs purposefully clogged up the streets outside City Hall in London, a 300-taxi convoy ‘from Spain’ descended on Brussels to campaign against Uber.

Blocking the airport route, drivers vented their anger at the app that is proving viciously competitive by avoiding tax.

“We come from Madrid, Barcelona, to defend a Europe free from Uber,” said Concha Guardado, slamming the €410 billion company with more than one million drivers worldwide.

Uber is banned in Spain.