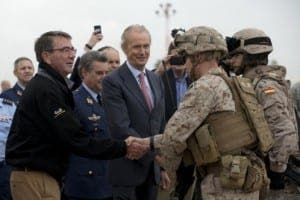 HE swooped in like James Bond on a secret mission deep inside rural Andalucia.

Sources revealed that the White House Defence Secretary was on hand to discuss continuing military operations in North Africa and the Middle East.

In particular, looking at the spread of ISIL, he was discussing the strategy of how to best use the 2,200 US troops based there.

The base is now the permanent official headquarters of the US ‘reaction force’ to fight jihadism, with navy destroyer USS Carney arriving in nearby Rota, in mid-September.

Carter later observed troop manoeuvres with his Spanish counterpart, Pedro Morenes, at the base.

The tour is the latest seal of good military relations between the two countries, with May’s agreement extending the number of US troops stationed at the Spanish base.