Villar will take over Platini´s duties during the Frenchman´s 90-day suspension, but will remain in his vice-president´s capacity.

Villar will have to consult with UEFA´s executive committee before making any decisions. 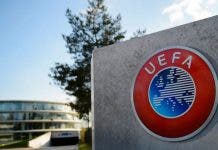