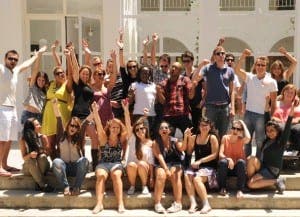 SIMPLY Red topped the UK charts, Eric Cantona made his comeback following his karate escapades at Selhurst Park and Marbella Design Academy was opening its doors for the first time!

Founded on October 1 1995, the academy celebrated in style this month for its 20th anniversary.

The sangria was flowing as students and staff celebrated with a barbeque, topped off perfectly with a locally sourced cake from Monda bakers.

Located in Monda since 2008, Danish founder Helle Byrn’s decision to move to a purpose-built, state-of-the-art facility has proved wise.