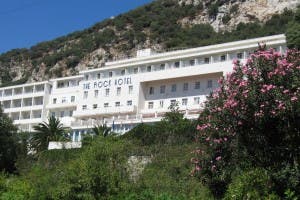 HEAVY rain has caused a landslide in Gibraltar.

The police have now shut the road outside the Rock Hotel and traffic is being diverted.

Instead cars are being diverted back down South Barracks or via the Old Queens cinema.

A Gibraltar police spokesman said: “After months of dry weather in Gibraltar, persistent heavy rain over the past 24 hours has led to a landslide.

“The diversion will remain in place until the area is secure.”