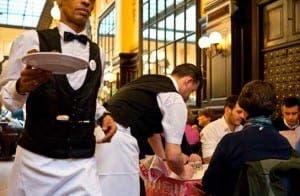 GORDON Ramsay was nowhere to be seen.

But culinary hell unfolded in a Valencian restaurant when a manager, 30, stabbed a waiter for serving tables too slowly.

The manager, 30, was arrested by national police for leaving his staff member severely injured.

There were stab wounds in his back caused by a 35cm knife as well as cuts and bruises.

The crime reportedly happened at the restaurant during service after the employee received death threats from his boss.