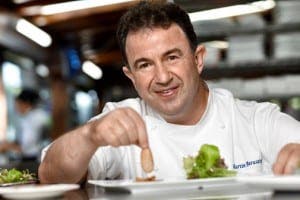 A TASTY trio of Spain’s eateries have made the list of the world’s 20 best restaurants.

And TripAdvisor named a Basque country restaurant the world number one according to millions of traveller reviews.

Food eaten at the winning restaurant, Martin Berasategui, in Lasarte near San Sebastian, was described as ‘culinary poetry’.

Also keeping Spain prominent on the food map is Catalunya’s El Celler de Can Roca which won the top spot in 2013 but now sits at number 11.

Finally, El Club Allard in Madrid came in at number 18 with its contemporary fusion cuisine hailed for its ‘surprising, imaginative, progressive, fresh and amazing’ food.

The UK and France are the only other two countries with three restaurants in the world’s top 20.

Impressively, Adam’s in Birmingham and Restaurant Sat Bains in Nottingham both made it into the top five, sitting at fourth and fifth respectively.