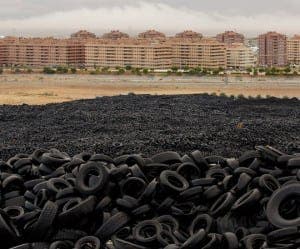 SPANISH authorities are looking for a shredder to dispose of a rubber mountain that has been building up for 13 years.

The 90,000 tonne heap composed of five million tyres is a blot on the landscape overshadowing a housing estate between Toledo and Madrid, as well as a serious fire and environmental hazard.

Local authorities announced in October they are putting out a tender from January to find a company to shred the tyres, which have been there since 2002.

A company originally in charge with recycling them was too small to cope with the vast operation and folded in 2011.