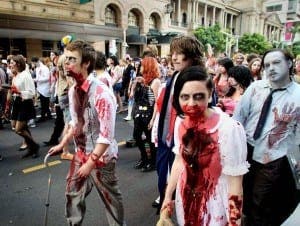 DID Spain arrive late to the Halloween party?

Whether you see it as an opportunity to dress up as a sexy nurse, to honour the dead or to bag some free sweets, the October festival is growing in popularity.

And unlike the commercial hype in the USA (with all respect to our beloved Princeton interns and American readership), Spain approaches Halloween with a more low-key, traditional, family-oriented take.

Legend has it that the northern Spaniards with their Celtic roots sip the ancient drink queimada  – local fire water infused with herbs and set aflame – around a log fire.

But others insist that the most vibrant celebrations will be found in the areas with the most internationals, such as Andalucia and Barcelona.

“I would say Halloween is really big here on the Costa del Sol simply because of the numbers of foreigners bringing their own celebrations to the table,” said mother of two Mirian Moreno.

“Last year my daughters dressed up to school and occasionally we trick-or-treat, but there’s less hype here in Spain than, say, London.”

It has been described by natives as ‘a festival for the very old and the very young’. 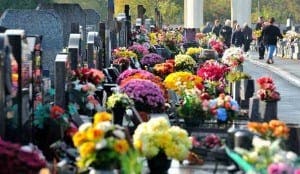 While kids compete to see who can exhibit the most fake blood, the elderly can be found commemorating the dead by the grave.

And what about the age abyss in the middle?

Student towns and cities go in for Halloween club nights and fancy dress parties, and in rural areas kids and teenagers can be found doorstepping local bars and cafes in search of loot.

Historically, Halloween in Spain is a three-day celebration collectively known as All Souls kicking off on October 31.

The day of the witches (October 31), All Saints Day (November 1) and Day of the Faithful Departed (November 2).

Far from a nationwide commercial moneymaker, the Spanish take the commemoration of their dead extremely seriously.

All Saints Day is a public holiday and many families gather at the graves of deceased relatives with holy water, flowers, food and drink to celebrate the lives of their ancestors.

Graveyards and cemeteries come alive with flowers, and the religious significance for this Roman Catholic country is undeniable.

The opportunity should not be missed to see Don Juan Tenorio, performed every All Saints Day and regarded as the most romantic version of the myth of Don Juan.

The tradition was discontinued after 2012 but Halloween parties and festivals are gearing up around the city. From a Michael Jackson tribute in Puerto Banus to an electronic rave in San Luis Poligono, the city is set to buzz.

IN Galicia, October 31 is called Night of the Pumpkins, and sees pumpkin carving, fancy dress, bonfires and rituals.

A colourful food festival can be found in Catalunya.

La Castanyada is an All Saints Day festival in Barcelona serving up autumnal delicacies such as chestnuts, sweet potatoes, sweet wine and panellets (marzipan and almond cakes).

The 23 women sentenced to death for witchcraft during the inquisition are remembered in a parade known as Fira de les Bruixes.

MAKE your very own Spanish drink as they do in northern Spain to keep the ghoulies away.

The preparation of this Galician speciality is a dramatic spectacle, often in a large cauldron outside in public.

Alex Trelinski - 24 Jan, 2022 @ 15:54
KING Felipe's sister, Cristina, has split from husband Iñaki Urdangarin by 'mutual agreement' just days after photos were published of him with another woman. A...