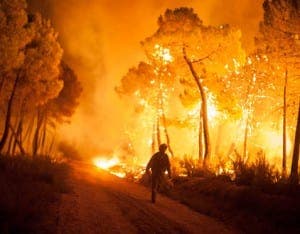 A GOAT-herder-turned-fire-starter has been charged with seven counts of arson.

The 46-year-old herder stands accused of burning 86 hectares of forest land in the last decade.

He is being held accountable for starting three fires in Casares this summer as well as three in 2013 and another in 2008.

Allegedly burning land in order for cattle grazing, the herder already has a prior arson conviction to his named from 2001.