ALL the best journeys begin without a destination.

But destiny must have been Rebecca Faller’s guiding star when she set off on a spontaneous road trip from Britain just before Christmas 1990, with no idea where it would take her.

That journey lead to an amazing new life in the most southerly house in Europe. And with a debut novel in the offing and the curtain about to rise in Gibraltar on her first play, she can be said to have truly arrived.

Along the way, she’s saved the Rock’s best beauty spot from a UEFA football stadium takeover, sorted out the women’s association and was recently shortlisted for a prestigious poetry prize. 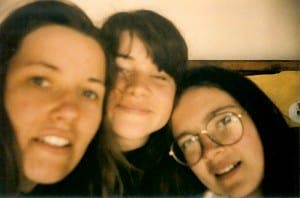 None of which the 46-year-old mum of four could ever have imagined, 25 years ago, when she drove away from Portsmouth in an old Renault 5 with two friends and no plans.

But when you’re 21, fed up with education and desperate for an adventure, who needs a map!

The three girls smoked like chimneys, survived on bread rolls and black coffee (why waste money on milk?) and saved money by kipping in the car.

At first they headed into France, but the winter chill in Paris and Lyon drove them on. Next stop: where else but Spain’s sunny Costa del Sol? 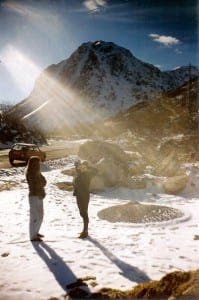 “We lived in Ronda first, which was just beautiful but still very cold,” remembers Rebecca over coffee (with milk) at Sacarellos in Irish Town.

“And when we arrived in Gibraltar our money was rapidly running out so we had to get jobs in bars and restaurants.”

What happened next is like something out of a Shakespearian romance. Rebecca met Claus from Germany on her second day in Gibraltar, fell in love and married him four weeks later in the Rock’s famous registry office, where John Lennon and Yoko Ono tied the knot.

“None of my family came to the wedding but they did know about,” she says of the whirlwind romance. “Needless to say they thought I rushed into it… and I did!”

The newlyweds lived on a boat at first and had three children together before parting ways eight years later.

As of her two friends… well both initially headed back to England although one returned shortly afterwards and remains in Gibraltar today with her husband and children. The intrepid trio still meet up every two years for a reunion. 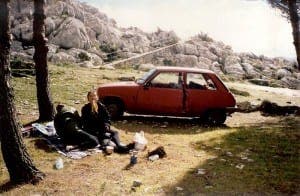 It would make a great book – and it’s going to. Last year Rebecca finished writing her debut novel, Renault 5, and is now weighing up her publishing options (watch this space).

So that’s how an English girl wound up on the Rock at the southernmost tip of Europe, living in a Trinity lighthouse cottage at Europa Point. But the story doesn’t end there.

Recently shortlisted for a Bridport poetry prize, she is this to have her first play performed as part of the 50th anniversary of Gibraltar’s WW2 evacuations this month.

Originally titled The Civil Garrison, it has been adapted, translated into llanito and renamed Llevame donde naci, after song written by a Gibraltarian in the 1930s which became an anthem for the evacuees.

“The evacuation is a fascinating subject with so many different human stories and it really made the Gibraltarians who they are today,” says Rebecca.

“There were all these children who had never left the comforts of Gibraltar and were suddenly taken to London in ships through submarine-infested waters.

“A lot of them had the time of their lives because they had so much freedom.”

The play is a perfect example of how Gibraltar has become a part of Rebecca, and vice versa. She freely admits to being ‘in love’ with the place and its wonderful history.

“It’s such a sociable place, I’m constantly meeting people and visiting friends,” she says. “And I love how you can walk everywhere.”

Rebecca is also in a book club, loves watching shows from the Royal Opera House live-streamed at the leisure cinema, and is also a football fanatic.

“I support a new team called Bruno’s Magpies, who are in the second division and doing really well!

“But in terms of English football, Portsmouth are my home team and Arsenal are my premiership team.”

Her kids might not agree but to an outsider she’d definitely win the ‘cool mum’ award.

Gibraltar is without doubt lucky that Rebecca rocked up in a worn-out Renault 5 with empty pockets all those years ago.

Perhaps it was destiny all round.

IT has been one of the biggest talking points kicked around on the Rock for the last two years.

After plans for an 8,000 seater national soccer stadium at Europa Point were released, Rebecca Faller set about organising a protest group.

“It was a ridiculous location for so many reasons; traffic being one and primarily the fact it is the last open space in Gibraltar,” says Rebecca. “It is essentially Gibraltar’s back yard.”

“We told the DPC they would never get our blessing and that there were many alternatives.”

The determined group were willing to tie themselves to railings if they had to; but it turned out there was no need.

After hitting the streets and raising awareness, they scored a goal with 8,000 signatures and, eventually, won the match .

THE Gibraltar Women’s Association was in a bad way when Rebecca Faller was asked to come in and work her magic.

Membership was flagging and its importance appeared to be ebbing away.

But now, on the eve of its 50th anniversary next year, the association is stronger than ever.

“All they needed was some social media-savvy people to come in and help boost awareness,” explains Rebecca.

“I did a bit of a recruitment drive and we now have more than 300 members, including the original founder, and 10 on the committee.”

The Facebook group also has over 1,000 members. As well as a forum for members to air issues and receive help and advice, it acts as a platform for campaigning for zebra crossings in necessary areas and similar projects.

Llevame donde naci, a play by Rebecca Faller, adapted for stage and directed by Jackie Villa and produced by The White Light Company, will be performed at Inces Hall Theatre.

The show starts at 7:30pm. All proceeds go to charity.