A SPANISH company has been named greenest utility in the world by industry experts Energy Intelligence. 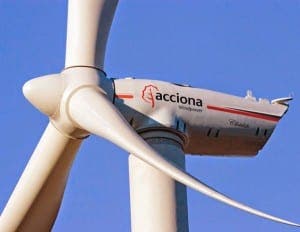 The rankings are based on companies’ renewable energy portfolios and greenhouse gas emissions.

The 100 utilities in the list have a combined 3,100GW of installed capacity, equivalent to around 55% of the world’s total power generation.

Acciona obtained 234 out of a possible 300 points in the ranking for CO2 emissions per MWh.

The company beat energy giants such as Iberdrola and EDF to the number one spot.

It’s the first time Acciona has appeared in the annual Energy Intelligence report.

HOW LONG BEFORE ONE KILOWATT OF ELECTRICITY IN SPAIN COSTS €1?

NO SMOKE WITHOUT FIRE: Just consider the facts – climate policy has failed.