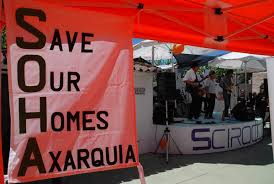 THOUSANDS of homeowners are eagerly awaiting an important change in planning laws.

The Junta are expected to vote in changes to the LOUA (planning law) which will save thousands of homes – many owned by expats – from demolition.

Belgian mayor of Alcaucin Mario Blancke has presented a case to amend the law, on behalf of expat campaign group SOHA (Save our homes Axarquia).

“By law these houses should be demolished, but does this seem like justice?” he said. “By law single sex marriage was banned and women were not allowed to vote.

“Legislators had to change to adapt to social reality.”

SOHA have already been successful in amending the law so that town halls have to pay homeowners who ‘bought in good faith’ compensation before carrying out demolition work.

The group’s latest proposal is to regularise or legalise land which has already been built on.

Blancke claims this benefits both the homeowner – who keeps their home – and the town halls – who don’t have to pay out compensation to demolish property.

There are an estimated 300,000 illegally built properties in the Axarquia.

A decision is expected in the coming weeks.