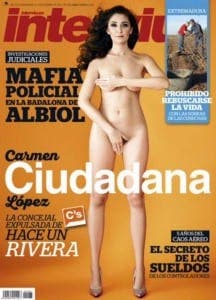 AXED Spanish councillor Carmen Lopez bared all for a magazine to prove she is still a politician with a good eye on the public figures.

The former Miss Sevilla, 43, stripped off for a December edition of Interviu after losing her job for trying to claim travel expenses when she moved to Chicago.

And the ex-Ciudadanos councillor has claimed the party were aware of her plans to commute 4,000 miles between Seville and the US.

“They can’t deny that they knew I was moving to Chicago,” she said.

“I requested to use video conferencing, which is free, but it was denied, It left me no choice. The trap was set and I fell into it.”