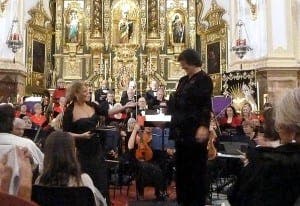 THE performance given at the Iglesia de la Encarnacion in Marbella, was received with such rapturous applause that they wouldn’t let the performers go.

Encore, More, Bravo, were the cries from the full house, and of course Annamaria Philipps gave them what they wanted. But I’ve got ahead of myself!

What better way to start the program than with Leroy Annderson’s Sleigh Ride, followed by a piece generally attributed to Bach, or was it Kuhnau? Uns ist ein kind geborn (For us a child is born). Then one of the choral greats, arguable the most known coronation anthem ever written, Handel’s Zadok the Priest, and how magnificent was that!

Another beautifully written Handel duet, with choir, orchestra, and the two soloists of soprano Julie-Anne Hunter and trumpeter, Angel San Bartolome Cortes. So ‘emotionally charged’ were the interacting melodies, that I suggest there were few dry eyes in the house.

Now the orchestra gets its chance to be centre stage with Rondeau’s A Christmas Symphony, I must admit I had not heard any of his compositions before, so I was looking forward to seeing if I liked his work, I will listen to some more before deciding.

The Colours of Christmas and All Bells in Paradise were the two works that followed, written by John Rutter, the prodigious British composer of oratorio works. And then Gounod, featuring soprano, choir, and orchestra performing first, O Divine Redeemer and then Noel, I’ve not heard Julie-Ann in finer voice than in her performance this evening, the purity of her voice is something I could listen to for hours. Then, Stephen Adams’s Holy City, always a favourite.

And finally back to where we began with another work by Leroy Anderson, A Christmas festival that is a musical collage of many of the well known carols that we all know and love. This inevitable became a ‘sing-along’, that, at the insistence of the audience, was repeated.

What an evening of music this was, from tears of joy, to discovering a composer that was new to me, but above all, from listening to the audiences appreciation of the performance of the two soloist, and the recognition of the amount of dedicated work made by every voice and instrumentalist of Collegium Musicum under the baton of Annamaria Philipps. So to all of them, Thank you, Thank you, Thank you.

Collegium Musicum are always looking for new voices and instrumentalist, so to find out more go to www.colmus.org or email them at info@colmus.org

A wonderful evening of music