SPAIN’S political leaders have cast their votes as the country heads to the polls for a landmark general election.

A high turnout is expected, with 100,000 more Spaniards than anticipated opting to cast their ballot by postal vote.

For the first time since democracy was restored in 1977 four parties – PP, PSOE, Ciudadanos and Podemos – are expected to poll over 15% of the vote.

A queue of up to 10 people waited patiently in the small seaside town of Casares marina this morning.

A Casares official told the Olive Press: “We have a queue with lots of people who have been waiting a long time to vote.

“People who have worked here in past elections say it is amazing. We won’t know the result until around 9.30 this evening because there are so many people.”

After casting his vote in Madrid this morning, PP leader Mariano Rajoy, tweeted: “I encourage everyone to participate. Today is an important day for our democracy.”

PSOE leader Pedro Sanchez said: “We are going to write the future with our vote.”

Sanchez faces a challenge from Pablo Iglesias’s Podemos, who are expected to take large chunks out of the PSOE’s traditionally left-wing voters.

Iglesias tweeted: “Thanks very much to our supporters that have got up with a smile and looking forward to making history.”

Ciudadanos leader Albert Rivera said: “To change Spain, you have to get involved.” 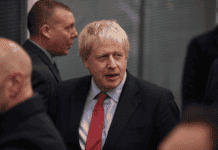