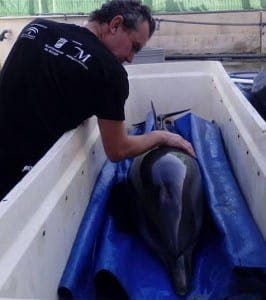 A STRANDED dolphin has been rescued by marine biologists on Torrox Costa.

The eight-year-old creature was spotted beached on the shore by El Morche locals who raised the alert.

It rushed to the marine recovery centre (CREMA) in Malaga’s Alborania museum where it will recuperate before being released back to sea.

It is the second dolphin emergency off the Malaga coast this year so far.