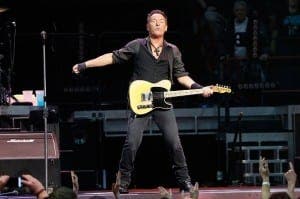 SPAIN’S cup final this year has been upstaged by the real ‘Boss’.

A concert by Bruce Springsteen at Real Madrid’s Bernabeu stadium on May 21 means that a planned final between Sevilla and Barcelona can no longer take place there.

The two giants of Spanish football have been forced to stand down for Springsteen, known as ‘The Boss’ and will now have to play the game elsewhere.

Music fans however are thrilled that the American superstar has announced three concerts, also including Barcelona’s Camp Nou on May 14 and San Sebastian’s Anoeta on May 17.

The legendary singer retains a fondness for Spain after his sons learned to surf in San Sebastian while the family holidayed in the Basque city in 2008.