IF you are lucky enough to dine at the swish Basque Restaurante Martin Berasategui – the world’s best restaurant according to TripAdvisor – order a bottle of Nilva from Manilva.

Produced from moscatel grapes grown on a tiny vineyard overlooking the sea, the dry fruity white made a big impression on the eight-Michelin-starred chef, Berasategui, who personally selected it for his wine list last year.

And he’s not the only big name to back Nilva: the wine is now also available at three-Michelin starred Arzak in San Sebastian and endorsed by TV chef David de Jorge of Telecinco show ‘Robin Food’.

This success would be remarkable by any standards but the fact that Nilva is the realisation of one Albacete man’s dream makes it all the more astonishing.

When I ask Argimiro Martinez Moreno how many people he employs to make the wine, his answer is simple: one, including himself! 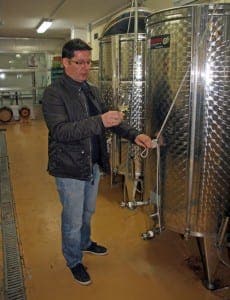 Not long ago the only local wine came in a plastic bottle with no label. Now Argimiro is leading a battle to revive and promote local winemaking which, after all, has been going on since Roman times.

His wine, says Argimiro, is ‘the only wine made on the Costa del Sol and the first to be sold in restaurants and official shops’.

Several restaurants and bars along the coast have stocked the delicious wine, but, there should be far more.

“And it’s important that local establishments serve up local produce, especially since Brits and Scandinavians love dry, fruity wine and have given great feedback.”

The Manilva vineyards are now, officially, at the heart of a massive project to boost local tourism. 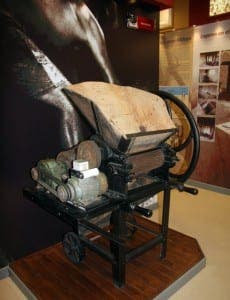 Argimiro also runs the new wine museum and ‘wine interpretation centre’ at the entrance to Manilva, a treasure trove of exhibits, with audiovisual room showing educational films, a chance to see wine being made, and local art exhibitions which change monthly.

Entrance is just €3 (and free for Manilva residents). There are extra options for every budget, including a guided tour with wine-tasting and appetisers for groups, starting at €13, and a new tour of the museum, bodega, vineyard followed by a local speciality of lamb chop grilled on vine branches (‘buenisimo’ according to Argimiro) from €30 per head.

Tours take place in Spanish or English, but Argimiro says he happily caters for groups of other nationalities.

The impressive museum building which boasts an underground bodega and lab, huge auditorium, bar and terrace, was built by the town hall in 2008 and used for two years as a wine school (Argimiro was originally a teacher) for 24 lucky students until the Junta ran out of funds. 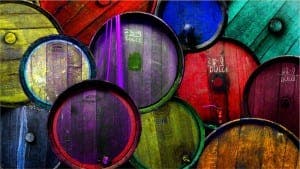 Now he is convinced that the town can cash in on the estimated six million people coming to Spain for wine tourism each year.

“I believe we can attract a new cultured crowd to Manilva, aside from the traditional beach tourism,” he estimates.

More than just a tourist attraction, the museum’s purpose is to inform locals as well as tourists about the area’s long-standing winemaking tradition. And also the need to protect it.

Maps and guides prove that some 500 years ago Manilva was covered in vines, but since then nearly three quarters have vanished, most of them in the last two decades due to development.

“Ultimately owners made a lot more money selling your land to developers than from making wine,” he explains. “Perhaps 30 to 40 times that amount.”

Some of the most productive vineyards, such as around Dona Julia golf course in Casares, have long gone due to the construction boom.

One of Spain’s most infamous developers Rafael Gomez Sanchez, aka Sandokan, allegedly bought up around half of the land around Manilva village and it was only the property crash that stopped him digging up the lot.

“I am passionate about protecting the vines,” says Argimiro, who is now lobbying the authorities to protect the vineyards and help to give them new life. 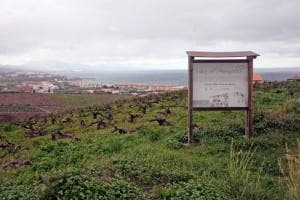 An agricultural engineer by trade, he moved his family to Estepona in 2009 and rented the vineyard ‘del Penoncillo’ from the town hall for €15,000 a year, including the use of the bodega and museum.

“It certainly hasn’t been easy,” admits Argimiro, who, currently bottles between 2,500 and 5,000 bottles a year depending on the harvest.

“It is definitely isn’t profitable yet, the world of wine is very slow.”

He continues: “It is also perhaps ironic that I have to pay so much to use the museum and land while I am doing so much for tourism. I guess I must be a little bit mad to pursue this, but if that’s what it takes to succeed then I’m happy to go with that. I really believe in this project.”

It’s hard not to admire this man for uprooting his life in Albacete to bring his wife, Inma, and kids Argimiro, 20, and Carlos, 15, with him on his wine crusade.

He was raised by a father who made wine as a hobby, so the passion for winemaking is almost genetic.

And his agricultural engineering degree, which he got in Cordoba, led to designing vineyards and other projects.

Now his key goal is to get more international chefs, like Martin Berasategui, to visit the winery and stock his wines.

He had first met Berasategui in San Sebastian, last year, after sending him some samples to try.

“He has since completely backed our vision, sponsored some vines and is planning to visit in the future to continue supporting our vision.”

If you don’t have the budget to sample Nilva along with a three-course dinner at Restaurante Martin Berasategui, you can buy a bottle from the museum in Manilva where it sells from €5.

You never know, the local restaurants nearby might let you open it with lunch.