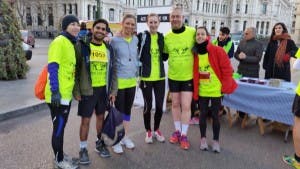 Ambassador Simon Manley and his staff helped raise €41,000 after setting off from Plaza de Cibeles on February 21 for the Corre por Siria event.

Mr Manley, a keen runner, completed the 10km course and praised the efforts of his staff, one of whom is of Syrian origin.

“I was delighted to take part with my embassy colleagues, and to have helped the effort to raise so much money to help the Syrian people,” he told the Olive Press.

“I hope that this money can be put to good use and help alleviate suffering.”

The items will be taken from a warehouse near Madrid to Valencia, and from there shipped to Turkey and collected by a Syrian NGO at the border.

‘Groundhog Day’: Christmas and New Year message from the British Ambassador in Spain

ANALYSIS: How 2021 became the deadliest year on record for migrants crossing from west Africa to Spain’s Canary Islands