LAST weekend Jerez was painted Tartan as the sound of bag pipes blazed through the barrios. 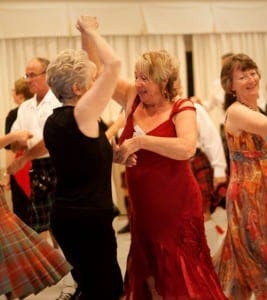 The city was the site of the 22nd Annual Meeting of Scottish Country Dancers in the Iberian Peninsula. People came from all corners of the world to indulge their passion and enjoy the Spring Andalucian sun.

Under the guidance of Sjoerd van Leerson, professional Scottish country dancing teacher, and organiser Douglas, professional layabout, golfer and enthusiast, they undertook two nights of dancing to the beat of Marian Anderson and her band.

Nationalities crowded in from as far afield as Hawaii, Germany, and Italy. Over 150 people came to the event, to dance, dine, drink and make merry with their comrades.

The climax was the main ball, taking place on Saturday evening. Dancers entered in pairs led by the sound of bag pipes. Many donned the proper Scottish country dancing shoes whilst most men wore the kilt, and potentially nothing underneath. 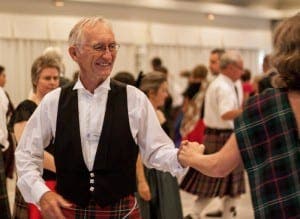 Arranging into groups of eight across the floor, the night was rapidly tapped away. They moved to the music of Marian Anderson and her band from East Scotland, who played singles from their new album as well as some old time favourites. Mairi’s Wedding and The Algarve Way got an echo. They danced to 36 songs in total, chosen by group requests.

Both Friday and Saturday, dancing began at around 20:30. After a brief break for water gulping, they continued on late into the night. Jerez has never seen anything quite like it.

Event organiser Douglas and his wife Carol jigged in the highest of spirits. Douglas, thrilled that the event was almost over, and Carol loving every minute of it. ‘For the first few dances you feel quite squiffy, but then the exercise kicks in and you get on with the dance’ she told me.

Douglas had always dreamed of setting up a Scottish country dance team, and in 2012 he got his chance. Having received training in St. Andrews, he began the Jerez group. Members came for interest, for curiosity and for social obligation. It now has members from the UK, Germany and, of course, Spain. This weekend was the highest point in their existence. 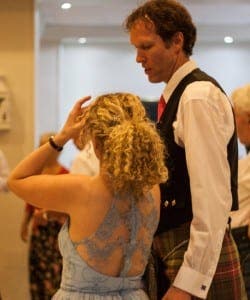 What really made the event though, was the dancers’ enthusiasm. Although sometimes they were perhaps less than attentive, “now is not the time for talking, now is the time for dancing” boomed the director more than once. It was their passion that made the event so special.

“We’ve been practising for over a year for this event” commented a bubbly attendee.

One couple came from Javea to see it. Sadly, they are no longer able to dance but it will take much more than that to stop them coming.

The technicalities of Scottish country dancing make it a bit of a challenge. There are just 4 or 5 different base moves that you must acquire. After that, there is a bheinn (that’s Gaelic for mountain) of other moves with more being created annually.

Nonetheless, people continue to adore the sport. It exercises them mentally, physically, and gives them the chance to make new friends. At the end of every couple of dances, couples split up and find a new partner. Through this, they get to meet a dazzling array of personalities.

Scottish country dancing has been de-nationalised. People dance the sport for the sport, not for Scotland. A lack of Saltire blue and white made this very clear. Nicola Sturgeon take note.

It has achieved international popularity within its own right. Iberia hosts four groups in Portugal, and an additional six in Spain. There are even Spanish run and Spanish led groups in Madrid and Barcelona.

In Jerez too the group is beginning to attract more and more Spaniards. Its battling on the stage against the local dance tradition, flamenco. They meet every Monday at Valdelagrana community hall from 8 – 10pm, before heading out for tapas. Everyone is welcome!

It’s an old Scottish country dancing tradition to create a new dance in celebration of an event or act. They may be creating one soon in honour of the Jerez weekend. You won’t want to miss it!

The 22nd Scottish Country Dance weekend in Iberia was a roaring success, all thanks to Douglas’s incredible organisations and everyone that came. The event was certainly one to remember. There are hopes next year to undertake a flash mob on the streets of Valencia, where it will be hosted by the Javea group from 3rd – 5th March 2017.

Get ready, it’s sure to be another fantastic weekend!