“EVERYTHING in Spain is done shoddily” proclaims an elderly British expat whilst sipping his café con leche. 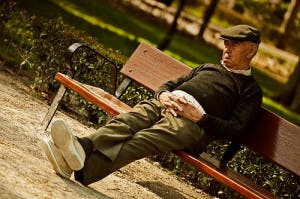 “They never finish a job.” The kind Spanish lady he is breakfasting with quickly points out that her son trained to be an engineer in Spain. He’s never done a bad job. The elderly expat falls silent.

We’ve all done it. Living abroad in a different country, with a different culture, inevitably leads to clashes. The Spanish perceive the English as hardworkers, powered almost entirely by tea, whilst the British complain audibly about the flawed Spanish education system.

As an Englishman myself politeness offered an infuriating barrier to honesty when I asked Spaniards what the ‘British stereotype’ is. However, I have managed to gleam a few snippets.

“In England, you are always in a rush. You never relax” proclaimed one Spanish lady whilst reclining leisurely in a cafe enjoying her mid-morning tostada.

Brits are usually madly dashing between meetings and activities. Time is of the essence.

On the other hand the Spanish mantra appears to be “tenemos tiempo” (we have time).

If this doesn’t put a damper on smug Brits, the next comment will. Great Britain is remembered as a place of appalling weather.

Teachers taking kids on a London school exchange were befuddled by the concept of a ‘quiz night.’ Having being invited to one, they didn’t know what it was. Following an explanation that it is a normal British nocturnal activity one laughed and said, “well, with such awful weather I suppose you have to find something to do.”

With 761,000 Brits moved to Spain for the omnipresent sun, she has a point.

British passion for hot weather has destroyed the Malaga coastline, and caused Ibiza to deteriorate into drunken revelry. The lands of Al-andalus and the matadors are gone, replaced with Hotel World and Villa metropolis.

Whilst the Spanish grumble about the destruction of their coastline, the British have some equally unpleasant comments about Spanish culture.

Some say they are lazy.

“We may well always be in a rush, but at least we get stuff done” retorted one English language assistant. She’d been watching grass grow whilst queueing in Carrefour.

Banks opening hours are also a bit of a joke.

The banks lazy attitude cuts Spain’s productivity and costs them money, all so the bankers can clock off early.

Expats, furthermore, have a word or two about the chronically unfair Spanish university system.

I recently heard about a nightmare story involving the English Literature course at the University of Cádiz. Taking this course you’d expect to see at least a word of English?

Irritated that they weren’t learning English on an English Literature course, one student complained. How did the university respond? It failed her. It failed her for questioning their methods.

The maths degree at Sevilla university is equally disastrous. They take on 1,000 students. By the end only 75 graduate.

“I think that they take so many to keep them off the streets”, explained the expat mother with plenty of experience wrangling with Spanish universities.

Talking with current students about the university system, they agree. “It’s like this here. Our university teachers don’t help us.”

A system like this in England would be expelled.

The Spaniards see the British as rushing around like headless chickens, whilst paradoxically the British think of the Spanish as lazy. The two cultures then exchange fiery comments about the weather, educational systems and working attitudes.

The difference is clear when a Spanish girl who couldn’t find a job in Spain moved to England.

‘In Spain it is hard to find a job as you have to have the right connections. You need to have a family link with the institution before they even take you. In England it’s so much simpler. I got a temporary job within the first few months, and a permanent contract shortly after. They’re not interested in your links to them, only in your attitude and if you can do the job well.’

DRIVING STEREOTYPES: Do you fit the British or Spanish driving stereotype?