The mother, Castañuella, remained with them throughout the night.

Zookeepers will not go near the youngsters until they are a month old. Then, they will all receive names beginning with ‘n’ to signify the year of their birth.

“I am very happy”, said Iñigo, co-ordinator of the Lynx programme at Jerez Zoo, when greeted with the news.

“It all happened so fast that I couldn’t get to the enclosure in time.”

They are very important individuals owing to their species critically endangered status.

The Iberian Lynx population declined dramatically in the 1980s, to number just 94 individuals by 2002.

Sensing danger, the European Union, the Junta de Andalucia and Portugal embarked upon a programme to help the species recover, known as ‘Programa de Conversacion ex situ del lince iberico’, or more commonly ‘Life.’ It involves the raising of lynxes in captivity for release into the wild.

The new lynxes are a part of this, due for release when they are six-months-old months.

Their mother is well practiced at child care. A captive breeding individual in the Andaluz arm of the programme she already has 13 offspring of which seven have been released into the wild.

Throughout this rather raunchy career she has not remained with the same male. Lynxes do not pair-bond, preferring the solitary life. This has allowed the zoos to keep the breeding males on rotation, meaning genetic diseases are mostly avoided. Breeding from a tiny population, there was a real risk of genetic problems resulting from close cousin mating. Genetic closeness has already caused testicles that do not descend properly and epilepsy in a few individuals.

“We have one male whose testicles did not descend. We don’t use him for breeding”, commented Iñigo.

Thankfully the new kittens have an especially good parentage, with both parents originating from different regions of Spain.

The project has already raised the population numbers exponentially to 361 in 2015. Iñigo hopes to reach 450 individuals by the end of 2016.

Declining populations of the Iberian Lynx were caused by a combination of human activity and disease amongst its favourite prey, the rabbit. Humans have hunted the Lynx and destroyed its habitat, to make more farmland. Meanwhile, the babbit haemorrhagic disease decimated the lynxes food supply.

The disease reached Spain in 1988 and spread like wildfire. It is caused by a virus that attacks the organs resulting in lethargy , fever and failure. A week after contracting the virus most were up dead. The declining population of rabbits caused the Lynx population to also collapse.

With inadequate food, they couldn’t survive.

Since then rabbit populations have begun to recover. The ‘Life’ programme team has assisted in this by reintroducing rabbits to some areas.

Nowadays, there is plenty of food hopping around the Iberian peninsula for the new kittens. They will be released in the Donana national park, and become another part of the programme’s success story.

The Lynx may yet be saved. 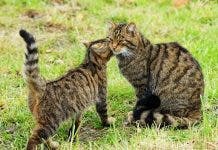