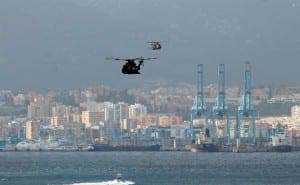 A MAJOR drug-smuggling operation has been broken up after Guardia Civil officers raided two helicopters.

A total of 20 people were arrested with most believed to have been residing in Estepona and Algeciras.

Police became suspicious of the gang after they spotted the same two helicopters repeatedly making the trip across the Straits of Gibraltar into Morocco.

In raids last week, police seized a ton and a half of hashish, along with €220,000 in cash, a truck and two helicopters.