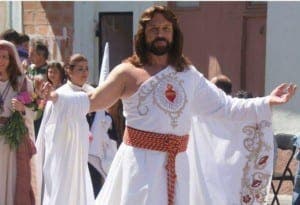 A MAN who has dressed up as Christ in Semana Santa parades for 30 years has been banned from the ritual because he is gay, he claims.

Ramon Fossati from Valencia has been barred from participating until 2019 because of ‘exposing a naked shoulder’ and ‘waving his arms ostentatiously’ last year.

The ‘deeply religious’ man was also fined €300 after last year’s parade ‘for no reason’ but the amount was reduced to €60 after he appealed.

Accused by the mayor of the brotherhoods of ‘parody’, Fossati argues he was simply acknowledging the crowd.

“Maybe it was punishment for being gay,” he suggested.

Cristina Hodgson - 1 Feb, 2023 @ 08:00
THE Regional Transfusion Centre is running a 'For the love of art, donate blood' campaign, where blood donors during February 1 to 11 will...