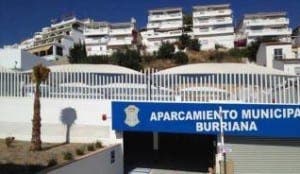 A CAR park that cost Nerja Town Hall €3 million has been shut less than a year after opening.

Continual flooding in the Burriana underground car park forced town hall officials to shut it, just days before the start of the Semana Santa processions.

Mayor Cristina Fernandez confirmed that the location of the car park left it ‘vulnerable’ because of the ‘instability of the hillside’ above the building and the amount of groundwater that it collects.

“We are hoping the closure will just be temporary,” Fernandez said. “Due to the recent rains and the location of the car park we had no choice but to close it.”

She added: “We hope to have all structural and safety problems sorted by the summer.”

Tragedy as man, 54, dies from injuries after tree falls on him at work in Spain

Fiona Govan - 23 Oct, 2021 @ 17:03
The peaks of Spain's Sierra Nevada received their first dusting of snow during the night on Friday, as the weather turned colder across the...