Local authorities said emergency services were called to the scene in Torrevieja but the child was dead by the time they arrived.

It is believed the boy and his parents had only just started their holiday.

A UK Foreign Office spokesman said: “”Following the death of a British national in Spain, we are providing support to their family. Our thoughts are with them at this difficult time.”

LONG READ: From the Costa del Sol to the Costa Blanca, British expat firms are showing their true grit in the face of Spain’s... 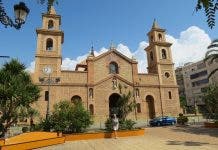