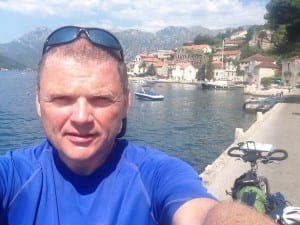 A FOREIGN languages teacher from the UK has completed an epic trip across Europe.

Swapping his interactive whiteboard for a road bike, Briton Andrew Sykes cycled 8,000km across the continent.

Starting in Tarifa, Europe’s southernmost point, Sykes cycled across Spain before entering France, Belgium, Germany, Denmark and Sweden. His voyage came to an end at North Cape after 96 days.

An ‘uplifting slog’ Sykes said the best part of his trip was testing out his languages.

“In my opinion the best teachers are ones that take a holistic approach so the experiences gained from taking a break can be really helpful when you go back to the classroom,” he said. “Starting in Tarifa was great as I was straight into speaking Spanish.”

He added: “It was about as challenging as a long-distance cycle through Europe could get. It’s interesting to compare the different countries along the route.”

Sykes – who teaches French and Spanish in Yorkshire – is now writing a memoir of his journey, titled The 35 Degrees: Heading North on a Bike Called Reggie, due for release at the end of the year.