JOANNA Lumley has joined a campaign calling for an end to the mistreatment of Spain’s hunting dogs.

The British actress’ commitment follows a protest outside London’s Spanish embassy on May 1, where campaigners marched with a pack of rescued Podenco hunting dogs.

“The appalling treatment of Spanish Hunting Dogs strikes a chill to the heart; it is impossible to believe that a country as sophisticated and fine as Spain could tolerate such unforgivable cruelty to living creatures,” said Joanna, “I add my name to the many who are calling for this inhumanity to be stopped once and for all.”

More than 150 people and 50 dogs walked in the peaceful photo protest, and the date has now been secured as the official International Day of the Podenco.

The march from the embassy to Downing Street featured the Podenco and Spanish greyhound breeds, many of whom face death from hunters when they pass their peak hunting years.

Campaigners estimate up to 150,000 of them are killed or abandoned in Europe every year.

The campaign, which has five more marches planned across Europe, hopes to educate and raise awareness of the dogs’ plight, and see legislation introduced that will protect them and punish their abusers.

Horror stories of puppies being thrown into ravines and hanged from trees are continuing to inspire Brits to call for change in Spain.

Toby, who now lives in Kent, was shot in the eye and dumped for killing a chicken. 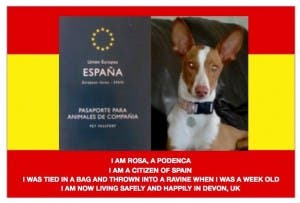 Rosa was found tied in a bag as a puppy with her siblings and thrown down a ravine.