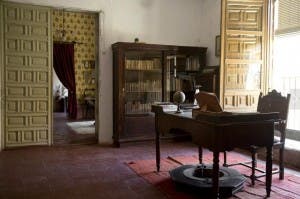 A SPANISH aristocrat’s palace which once hosted Napoleon is on the market.

For the bargain price of €350,000, you too can rest your head where the French military general once did.

Five-bedroomed Castrojanillos palace in Valderas, Valencia, was a refuge for Bonaparte when he was travelling through the peninsula.

It has two bathrooms, seven balconies and a sizeable 1,200 square metres of floor space.

The history-drenched property was declared ‘of cultural interest’ in 2008 and belonged to the Marquis of Castrojanillos for many years.

Best of all, it comes furnished already so the vintage, shabby chic ambience is included.

Napoleon spent many years trying to invade Andalucia but French troops were finally forced to retreat in 1812’s Battle of Salamanca, which helped liberate Spain from French occupation.

Cadiz played a strategic role for the allied forces to defeat the French while British naval gunboats from Gibraltar also worked to fight the attacking French forces.