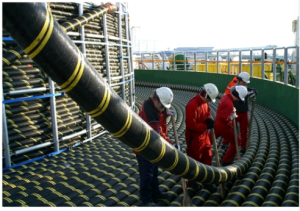 A RECORD-BREAKING underwater mega-cable between Spain and the US is being built by Facebook and Microsoft.

The 6000km cable will run from Northern Virginia to Bilbao, and can carry record amounts of data at 160 terrabytes per second.

Scheduled to be completed next October, the lead will link Europe, the Middle East and Asia with the US via Spain.

It is hoped it will act as a springboard for IT based companies in northern Spain.