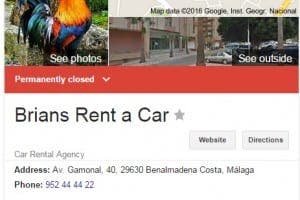 After 29 years of service Brian’s Rent-a-Car has been listed as ‘permanently closed’ by the search engine.

But while some previous disgruntled customers were ready with the champagne, boss Brian Johnson insists the Benalmadena-based company is ‘going nowhere’.

“I have no idea why Google would have done that,” Johnson told the Olive Press. “So many things end up on the internet that are untrue these days.”

Showing his usual passion for customer service, he added: “Everything is still operating as normal. We still have the same w***** clients who don’t clean the cars and who crash them all the time.”

Brian’s Rent-a-Car is notorious for coming under fire from angry customers.

The Olive Press has run a number of stories on the company, which also has a string of posts on TripAdvisor about unreturned deposits and rude behaviour, stretching back as far as 2011.

“I am surprised he’s still in business, the champagne will stay on ice for now,” he said.

“My main disappointment is with the Spanish authorities, who have done nothing to stop him.”

More recently a client, UK hypnotist Ken Webster, discovered a condom on the back seat of his car rental.