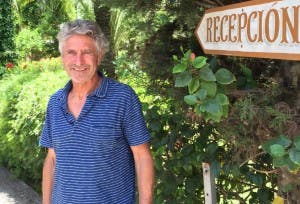 A LEADING British businessman based in Spain has urged expats to consider ‘becoming Spanish’ in protest.

The Andalucía-based hotelier has also urged ‘moderate, open-minded’ young people in England to move to the continent.

Peter Whaley, the owner of various hotels in Tarifa and father of World number one kitesurfer Liam Whaley, insisted: ‘Thanks to the older, white little Englanders we are all going to suffer in Europe.

“Yes Europe needs reforming, but not from the sidelines, from within.

“I’ve been running businesses here for over 30 years and I understand the failings of Spain and Europe but this however will only make it worse.”

The owner of Tarifa’s emblematic Hurricane Hotel that opened in 1984, added: “we are not little Englanders here – we are open and worldly and I would urge all British expats in Spain to consider taking Spanish nationality in protest.

“I would also urge young people living in London, like my daughter, sickened with this vote, to consider moving to the continent.”