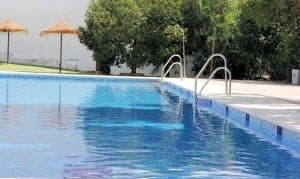 THOUSANDS of people face being cut off from Colmenar’s water supply, despite the town unveiling its large swimming pool.

Colmenar mayor Jose Martin Garcia has been slammed by residents after opening the pool just hours after making a public plea for residents to limit their water usage.

In spite of the situation, the town hall went ahead with the annual opening with the municipal swimming pool.

“Do not use water unnecessarily and it is forbidden to use drinking water for your gardens, swimming pools or car washing,” Garcia said.

“It is imperative to save water and that’s why we must restrict it at present.”

The town of 3,500 people has seen its water deposits deplete gradually over the last three weeks and it was a final admission that there was no water left.

“We have a perfect storm of insufficient storage, extremely low water table and peak summer demand.”