HIS demonic guttural screams cut through the cooling mountain air like a gorilla in full attack mode. 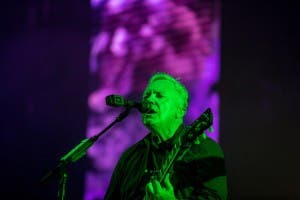 From such a short, unassuming man, the sheer energy Black Francis conjures up is little short of breathtaking.

Then again, this is the Pixies, a band that inspired Nirvana’s Kurt Cobain, and ‘changed the life’ of Radiohead’s Thom Yorke, while at school.

Part psychedelic, part punk – totally rocking – their near two-hour headlining set at Bilbao’s BBK festival is almost perfect; one of the very best live shows I have seen in a decade in Spain and easily up there with Blur at Benicassim, last year.

Hardly drawing in breath, the band, that now has bassist Kim Deal back in tow, tore through a mix of musical genres, taking in everything from swamp rock to surf, and country to even pop, particularly with hits such as Here Comes Your Man and Monkey Gone to Heaven.

Highlights were definitely Debaser, which is based on a film by Spanish genius Luis Bunuel, and Isla de Encanta, appropriately in Spanish with its chorus ‘Me Voy, Me Voy’.

Now in its 11th year, the wonderful festival is a breath of fresh air from others around the peninsula. Perched above the hip, industrial city of Bilbao – a true foodie Mecca – it is surrounded by green hills and counts on hundreds of trees around the site, with a funky dance area literally hidden in a copse.

Striking singer Lauren Mayberry also did her bit to represent the feeling of most British pop acts in Europe these days, apologising for Brexit and insisting the UK was full of ‘arseholes’.

‘We are really sorry – we didn’t vote for Brexit – we don’t understand it,’ she told the audience, before launching into a great rendition of the song Gun, with its chorus ‘better off dead’, which she appropriately dedicated to Boris Johnson.

The new songs from album Every Open Eye came over well, but without a doubt, the highlight for most of the crowd was their hit Clearest Blue.

New Order’s later headline slot on the second stage was a damp squib (and not just because of the drizzle), with Bernard Sumner showing little interest in the show, indeed anything, but his glass of wine, plopped on his amp behind him.

The problem was the short, largely poppy set geared heavily towards new material from recent album Music Complete, with few classics bar The Perfect Kiss and, to be fair, an excellent Blue Monday.

While Everything’s Gone Green was OK, Temptation was butchered and Barney marched off at the end admitting: “You’ve been a great audience, shame about me.”

The night was fortunately rescued by Arcade Fire, who brought a dozen talented Canadians for a master class in showmanship.

They whipped up the crowd with genuine enthusiasm with highlights being ‘My Body Is A Cage’ and a duet between the Butler brothers. The crowd lapped it up.

Other acts worth a mention are creative US songwriter Grimes, who put Lady Gaga in the shade with an amazingly visual show, and Hinds, a fabulous girl group from Madrid, who are so incredibly infectious I can’t wait to see them again.

Last, and indeed, very last, were Underworld, on stage at 2am, with a fabulous dance set that took me back a couple of decades to a field in, well, somewhere off the M25.

All I want for Xmas: Tickets for Blur, Red Hot Chilli Peppers, Robbie Williams on sale, but Pet Shops Boys perform in Spain for...