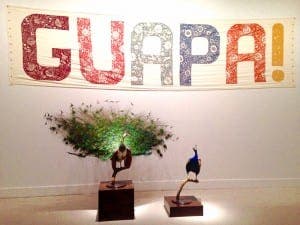 I OFFICIALLY attended my first ‘meet up’ this Saturday past. After broadcasting my need for companionship across various social media groups, I received a number of responses.

I have often found social media an isolating experience; with simulated friendships and virtual validation it has, more often than not, left me feeling pretty empty. Lulled into the illusion of virtual popularity only to feel the sting of real distance; a lack of physical interaction. Wow, what a gloomy way to start this post! It gets better, I promise.

This instance felt distinctly different as I was actually to meet individuals behind display pictures. Live human beings that drink coffee, talk, laugh and converse! Very exciting stuff indeed. It had been suggested on the Monday that I attend an English/Spanish speaking group that meet in Malaga, generally visiting galleries. My Spanish is very basic, and while aspirational, I was sure I would not master the language by the weekend. However, I do love a gallery and hoped that this would see me through.

In case you were wondering (hoping); I did not learn Spanish by Saturday. I was equally as disappointed as I’m sure you are now. On the train to Malaga I studied some key phrases which I hoped would see me through, and then blanked on each and every one of these phrases in actual usage. It was silly, and a little colonial of me, to think that knowing phrases without understanding the language would help in any real sort of conversation; a two way back and forth, not just a back, or a forth…

It was a large group with a diverse mix of ages and gender. The expats I met spoke excellent Spanish and I was more than a little embarrassed. And the Spanish; their English was amazing, with more than a few rivalling the breadth of my vocabulary. They were overwhelmingly kind and welcoming, whilst equally vibrant and interesting.

I spent the majority of the Centro de Arte Contemporáneo walk round with Spanish group members. I was keen to better understand the culture in which I now live. I had read Homage to Catalonia, some articles, googled Spanish politics, trolled Wikipedia…. All of these pieces of writing have been informative but they are not absolute. Like any writing it is an opinion, a slant, a musing. And, as you’d imagine, articles written in English are tinged with a certain amount of our British cultural conditioning.

Art was the perfect medium with which to express our ideas, to communicate our person to one another. How perfect an idea this meet up group had come upon! Art, with its interpretative quality, has the ability to hold an infinite amount of meaning for an infinite number of people. We could talk and talk about how we saw this painting, this sculpture, this photograph whilst enjoying the different cultural and personal perspectives we all contribute.

Visiting galleries in Britain, I have often felt nervous. There is a suspicious feeling that I am being watched watching art. That the way I react to it should somehow be “right.” When walking round with others I’ve been worried about saying the wrong thing or misinterpreting the artist’s intentions. This has left me scanning the handy blurbs that accompany each piece.

As I’ve grown older I’ve grown less and less interested in saying the right thing, or interpreting the right way. But still, I scan the blurbs. Maybe I’m not so free of my former ways. A small part of me still wants to see if the artist with validate my opinion. Not at the CAC Malaga! All of the blurbs were, of course, in Spanish. I also purposefully skipped the English handouts of each exhibition.

Each thought or feeling I had about the exhibition was from my own interaction with it in that time, in that space, with these new people. I had bonded with a Spaniard over Science Fiction, or Ciencia Ficción as I was to learn. He had originally asked if I’d written any Science Fiction, to a disappointed “no, I’m afraid not”, while exclaiming my love for the genre. We bonded over Star Trek and Arthur C. Clark as we offered observations on various art pieces. I practised my pronunciation of Ciencia Ficción as we looked at Dauphin Island I, 2012 by Dionisio González. Looking somewhat like a crashed spaceship it reminded me of dystopia; like the worn and used futuristic homes of Tatooine, left to the whims of nature, plant life snaking its way along the concrete. Yes I just made a Star Wars reference.

We were both drawn to Souffles Dans le Verre, a large upside down bouquet of, what looked like silver balloons, blown from glass. Some were half deflated and some were perfectly round. Each “balloon” reflected back a tiny image of ourselves with a number of perspectives and distortions. Almost like a fun house mirror! There’s always space to behave like a big kid in a gallery.

My Spanish companion helped me to understand the political and cultural back drop to Manuel León’s collection. I’d read of Semana Santa and seen the accompanying images of hooded penitents. I understood the ceremonial wear as a part of Holy week festivities but I felt these images were a little more satirical. On the surface, they were traditional in style; scenes of important men at desks, debating, speaking profound words and thinking great thoughts. Upon closer inspection they lost any notions of the stoicism so associated with classic paintings of powerful men. Rather, they exuded ego, cruelty and child-like bickering. My Spanish friend pointed out the Financial Times article featured in San Francisco está asi and I started to get it. We spoke of old forms of power being paralleled with the new, which then led onto Spanish politics coupled with a little Brexit chat.

I brought my love of Shakespeare to Asnería (2010), an installation by Pilar Albarracín. A large stuffed Donkey reads a top a pile of books and magazines. I couldn’t help thinking of Nick Bottom from A Midsummer Night’s dream after his transformation at the hands of Puck. I was then offered an explanation of the word “Guapa” which was hand stitched onto a large cloth banner above two stuffed peacocks. Guapa means beautiful in translation but is more like shouting “you’re hot” at a passer-by. I was given a demonstration of how this would be said to a woman and it was pretty much hollered across the room with a cupped hand to mouth. It’s considered slang and reminds me of Scottish lads shouting “Oi legs!” or “I would” out of their white van or souped-up Corsa. I laughed as I understood; noting the common courtship peculiarity across both cultures. Pilar Albarracín, ever the storyteller, had placed a peacock and peahen underneath the banner titled macho y hembra. This seemed to mirror the banner with the peacock, all loud and proud, displaying his feathers to the peahen. Perhaps all he’s really doing is shouting “Guapa!”

Ultimately, the day was a success and I am now desperate to learn fluent Spanish. I really enjoyed gaining the perspectives of other people, from other places, on art works that can be read in an infinite number of ways. I can’t help but think of, ‘The Death of the Author’, by Roland Barthes. He suggests that art is ‘a tissue of quotations drawn from the innumerable centres of culture… (that) everything is to be disentangled, nothing deciphered.’ As we stood interacting with the exhibition, and each other, we brought pieces of ourselves into the fold. I was able to better understand myself, the people around me, and the culture in which I now live. Thank you to meet up, the Centro de Arte Contemporáneo Malaga and to everyone I met on Saturday!

Kirsty Mckenzie - 18 Jan, 2022 @ 17:30
DEBATE is always raging over whether moving to Spain is the secret to finding happiness.  Whether it's €1 coffee or the laidback lifestyle, almost-always-Spain is...