THE first ever solar-powered aircraft to travel round the 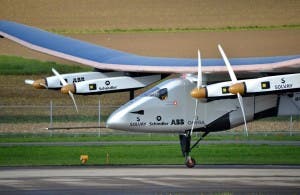 world has completed the feat after touching down in Abu Dhabi.

Solar Impulse 2, piloted alternately by Bertrand Piccard and Andre Borschberg, travelled almost 43,000km in a total of 17 stages without using any fuel.

The plane, which has a wingspan wider than a Boeing 747 and carries more than 17,000 solar cells, began its journey in March 2015 in Abu Dhabi, spending a total of 23 days in the air.

It stopped in Sevilla at the end of June after crossing the Atlantic.