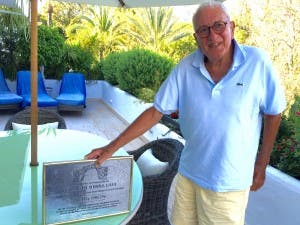 A BRITISH developer has been awarded for masterminding one of the first gated-communities in Marbella.

Pioneer property developer John Green, 84, has been named Chairman Emeritus of the Community of Proprietors in El Ancon Sierra, I,II,III.

He developed the urbanization on Marbella’s Golden Mile in the early 1980’s, where he was the first community president and still has a home.

A commemorative plaque has now been installed thanking John for his ‘his vision and talent in creating this exceptional residential estate’.

El Ancon Sierra was one of the earliest gated communities in Marbella, with full services unheard of at the time, including central gas, 24 hour security, an administration office with a secretary to look after owners’ needs, a heated pool, a clubhouse with a restaurant, and many other features.

John – a property developer in London in the 1960s – came to Marbella in 1970 with his company City and Saint James.

He first developed the well-known El Ancon project of 12 villas on the Marbella beach, east of the Oasis Club, followed by the El Ancon Sierra project whose first phase was finished in 1983 when the clubhouse was inaugurated by Princess Michael of Kent.