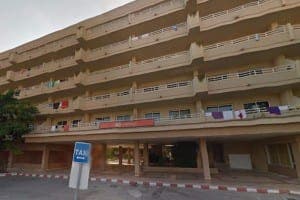 A TEENAGE girl has been rushed to hospital after falling from a balcony.

The Brit plunged from the fourth floor of the three-star HM Martinique Hotel, in party capital Magaluf.

The teenager cheated death after colliding with stairs on the way down.

The 19 year old reveller who  is yet to be named, was believed to have consumed a large amount of alcohol prior to the fall.

She was discovered yesterday morning and is in a ‘serious’ condition. The girl is currently in Son Espases Hospital in the island capital, Palma.

The number of Brits involved in hotel falls this year in Magaluf has dropped.

This comes after a new set of laws in Magaluf came to force in June this year, in a bid to crack down on fatalities public indecency in the party hotspot.