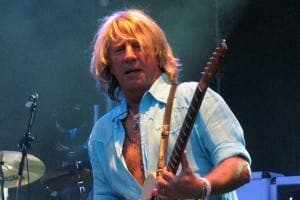 ROCKSTAR Rick Parfitt has said he doesn’t want to ‘drop dead in front of fans’.

The shocking statement came after the Status Quo singer has been advised to take time out on medical advice.

Rick, who hasn’t played the guitar for three months, has had two heart attacks and quadruple heart bypass surgery.

The guitarist collapsed after a show in Turkey this June, despite feeling unwell before going on stage.

He said “I did actually die. I died for about three-and-a-half minutes apparently and they had to resuscitate me, pump me for half an hour or so.”

The 67-year-old is currently recovering in the Spanish sun.